Note from Joel E. Tohline:  I doubt that she knew it, but Dr. Vera C. Rubin was a significant influence on my astronomy career. What follows are some highlights of my early professional interactions with her.

An astronomical symposium sanctioned by the International Astronomical Union (IAU) titled, Internal Kinematics and Dynamics of Galaxies, was held in Besançon, France, August 9 - 13, 1982. This is the professional conference at which I presented a short "poster paper" titled, "Stabilizing a Cold Disk with a 1/r Force Law.". It appears as a two-page article that begins on p. 105 of the published symposium proceedings.

Dr. Rubin was (again!) the lead-off speaker for this five-day symposium; accordingly, the paper that she prepared for the symposium — titled, Systematics of HII Rotation Curves — appears as the first article (pp. 3 - 8) in the proceedings. Two pages of text (pp. 9 - 10) that immediately follow her article record six questions that were asked of Dr. Rubin at the end of her presentation, along with her six responses. The sixth question was from me; here is the published record:

This nod of recognition from Dr. Rubin broadened my visibility — both professionally and among the public — more than any other single citation. For example …

That same month (June 1983) I received a (hand-written) letter from Dr. Joel Primack (a physicist at UC, Santa Cruz) containing the following text:

Receiving this request from Joel Primack was exciting for me on two fronts: (1) Having my work cited in a high-quality review article would significantly enhance its visibility. (2) I had only recently (1978) earned my doctoral degree in astronomy from UC, Santa Cruz and had completed courses taught by both Sandy Faber and George Blumenthal, so I knew them well and was happy to hear that they had become aware of research endeavors that I was pursuing beyond the focus of my dissertation research. 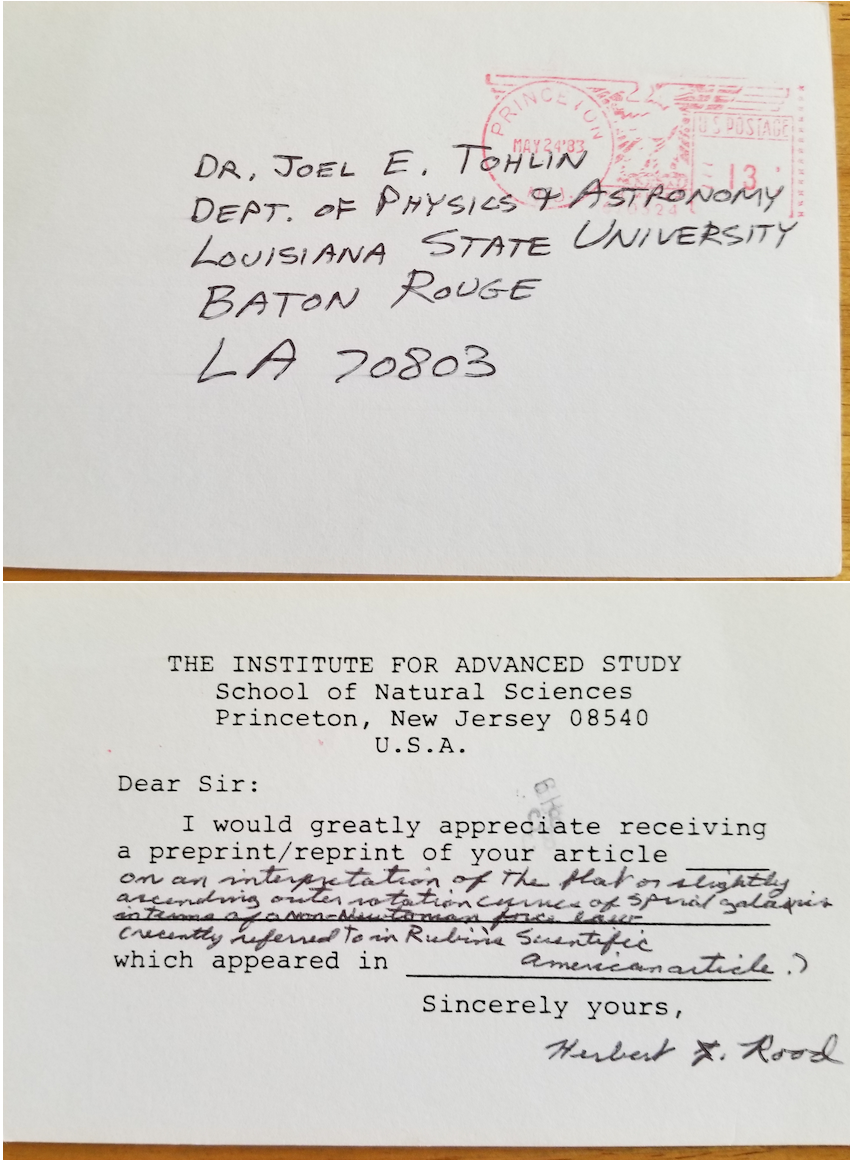 Also, in late May of 1983, I received a postcard requesting reprints of my work from Dr. Herbert Rood (Princeton's Institute for Advanced Study). The letter that I wrote to him in response (dated 3 June 1983) contains the following text:

Bahcall then asked whether or not I had considered how the standard mathematical expression of the virial theorem would be generalized in the context of my proposed non-Newtonian gravitational attraction. He derived what he considered to be the appropriate additional term that would be required, then applied the result to the case of "rich clusters" of galaxies. HIs conclusion was that my proposed modification of Newton's Law "… would overestimate the missing mass [in rich clusters] by a factor of 30" relative to what is observed. His reference regarding the relevant observational measurements was Neta Bahcall's article in Annual Review of Astronomy and Astrophysics (1977, Vol. 15, pp. 505 - 540).

I wrote back to John Bahcall, stating that I agreed with his derived correction to the virial theorem but that my interpretation of the published observational results — as found for example in Neta Bahcall's review article — was different from his. It looked to me as though the modified virial theorem expression nicely explains the mass-to-light ratio measurements in rich clusters. After studying my response, Dr. Bahcall wrote back:

Over the subsequent couple of decades, John and Neta Bahcall visited LSU several times. As it turns out, John had graduated from high school in Shreveport, Louisiana, and he had a brother who lived in Baton Rouge.

Exchange of Letters with Jim Felten (1984) … and Beyond

About half a year later, Dr. James E. Felten — at the time, a research scientist at the NASA Goddard Space Flight Center in Maryland — was discussing with Dr. Rubin the published work of Milgrom & Bekenstein and she told him that Joel Tohline "worked on 'Milgrom' ideas before Milgrom!" (See Felten's hand-written comment inside the red oval of the image shown here, on the right; click to make the thumbnail image larger.). I presume that Dr. Rubin was recalling the discussion that I had had with her group in early 1980. Dr. Felten then contacted me and we exchanged a few letters on the subject. Dr. Felten's critique of the Milgrom-Bekenstein work was published in The Astrophysical Journal (1984, 286, pp. 3-6); page 5 of this article includes a Note added in manuscript 1984 June 6 acknowledging these discussions.

In my (old-fashioned, paper) files, I have a record of insightful written exchanges that I had with a number of researchers throughout the decade of the 80s. For example …