[Comment by J. E. Tohline on 24 May 2016]   This chapter contains a set of technical notes and accompanying discussion that I put together several months ago as I was trying to gain a foundational understanding of the results of a large study of instabilities in self-gravitating tori published by the Imamura & Hadley collaboration. I have come to appreciate that some of the logic and interpretation of published results that are presented, below, has serious flaws. Therefore, anyone reading this should be quite cautious in deciding what subsections provide useful insight. I have written a separate chapter titled, "Characteristics of Unstable Eigenvectors in Self-Gravitating Tori," that contains a much more trustworthy analysis of this very interesting problem.

Material that appears after this point in our presentation is under development and therefore
may contain incorrect mathematical equations and/or physical misinterpretations.
|   Go Home   |

This is a direct extension of our Part 1 discussion. Here we continue our effort to check the validity of the Blaes85 eigenvector. The relevant reference is:

Our Manipulation of These Equations

Putting the two together implies,

Evaluating this TERM5 expression for the case of <math>~\beta = 1</math>, we have,

Sum of TERM1 and TERM2

Or, continuing to develop the analytic power-law expression,

Sum of TERM$ and TERM5

When added together, we obtain,

So we see that the coefficients of the lowest-order <math>(\beta^0 ~\mathrm{and} ~ \beta^1)</math> terms are zero, and the coefficient of the <math>~\beta^2</math> term is almost zero! My analysis the second time around gives,

Exactly the same as the first time around.

Alternatively we can write,

Let's rewrite both of these expressions in terms of a power series in <math>~\beta</math>.

Dropping all terms on the right-hand-side that are <math>~\mathcal{O}(\beta^3)</math> or higher, we have,

Together, then, we have: 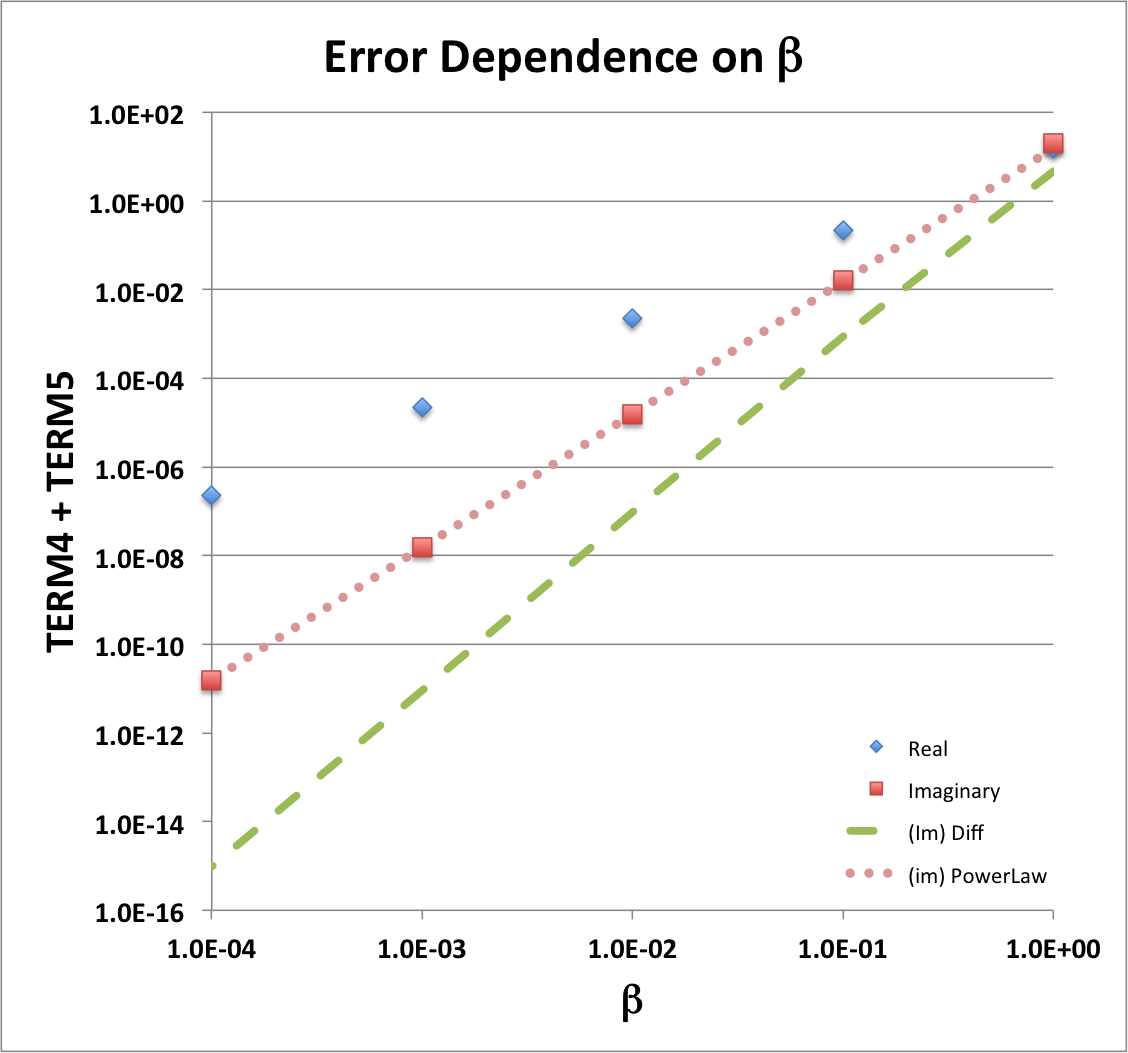 Material that appears after this point in our presentation is under development and therefore
may contain incorrect mathematical equations and/or physical misinterpretations.
|   Go Home   |

When added together, we obtain,

As stated above, the eigenvalue problem that must be solved in order to identify the eigenfunction, <math>~\Lambda(x,\theta)</math>, and eigenfrequency, <math>~(\nu/m)</math>, of unstable (as well as stable) nonaxisymmetric modes in slim <math>~(\beta \ll 1)</math>, polytropic <math>~(n)</math> PP tori with uniform specific angular momentum is defined by the following two-dimensional <math>~(x,\theta)</math>, 2nd-order PDE:

where, <math>~f(x,\theta)</math> is the enthalpy distribution in the unperturbed, axisymmetric torus, and

We also should appreciate that,

If an exact solution, <math>~(\Lambda,\nu/m)</math>, to this eigenvalue problem were plugged into this governing PDE, we would expect that both of the following summations would be exactly zero at all meridional-plane <math>~(x,\theta)</math> locations throughout the torus:

While an exact analytic solution to this eigenvalue problem is not (yet) known, Blaes (1985) has determined that a good approximate solution is an eigenvector defined by the complex eigenfrequency,

and, simultaneously, the complex eigenfunction, 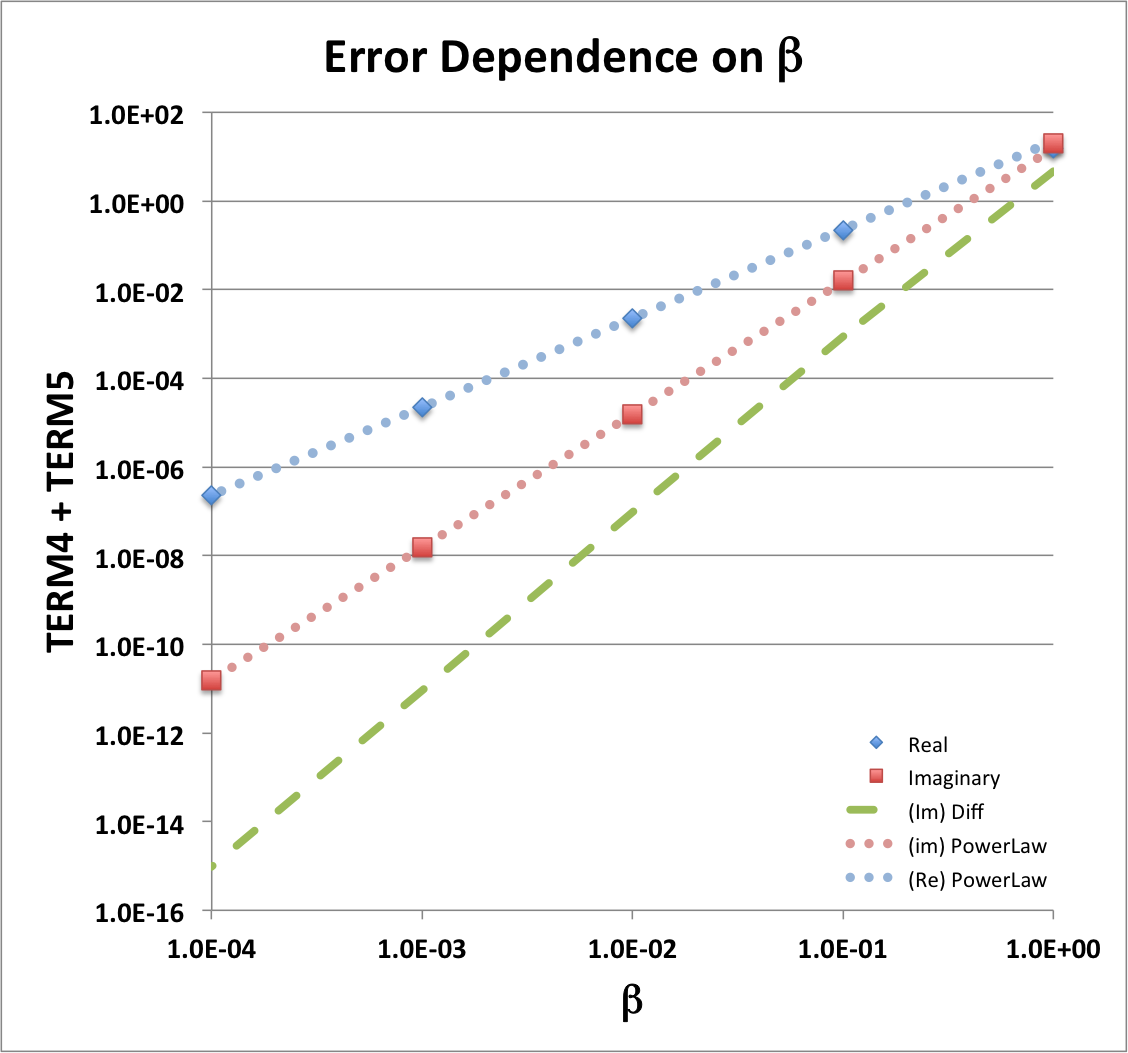 We have plugged this "Blaes85" approximate eigenvector into the five separate "TERM" expressions — analytically evaluating partial (1st and 2nd) derivatives along the way, as appropriate — then, with the aid of an Excel spreadsheet, have numerically evaluated each of the expressions over a range of coordinate locations <math>~(0 < x/\beta < 1; 0 \le \theta \le 2\pi)</math>. The appropriate numerical sums of these TERMs are, indeed, nearly zero for slim <math>~(\beta \ll 1)</math> configurations.

As our above analytic analysis shows, when each of the expressions for TERM4 and TERM5 is rewritten as a power series in <math>~\beta</math>, a sum of the two analytically specified TERMs results in precise cancellation of leading-order terms. For the imaginary component of this sum, our derived expression for the residual is,

The dotted, salmon-colored line of slope 3 that has been drawn in our accompanying log-log plot was generated using this analytic expression for the <math>~\beta^3</math>-residual term. It appears to precisely thread through the points (the salmon-colored squares) whose plot locations have been determined via our numerical spreadsheet evaluation of the imaginary component of the "TERM4 + TERM5" sum. Additional confirmation that we have derived the correct analytic expression for <math>~\mathrm{Im}(\mathcal{R}_{45})</math> comes from subtracting this analytically defined <math>~\beta^3</math> residual from the numerically determined sum: The result is the green-dashed curve in the accompanying log-log plot, which appears to be a line of slope 4.

Analogously, for the real component of this sum, the precise expression for the residual is,

The dotted, light blue line of slope 2 that has been drawn in our accompanying log-log plot was generated using this analytic expression for the <math>~\beta^2</math>-residual term. It appears to precisely thread through the points (the light blue diamonds) whose plot locations have been determined via our numerical spreadsheet evaluation of the real part of the "TERM4 + TERM5" sum. Notice that at the surface of the torus — that is, when <math>~x/\beta = 1</math> — this <math>~\beta^2</math>-residual goes to zero, in which case the leading order term in the "real" component residual will be drop to <math>~\mathcal{O}(\beta^3)</math>.